How to clean your electric bike after riding in the snow

As you soon you bring your ebike inside, all that snow is going to melt. Not only is it going to make a mess, but it could also damage your bike, as well as the flooring where you bike sits. Here's how to clean your ebike after a ride in the snow:

When you get home, use a snow brush to remove as much loose snow as possible from the bike while you're still outside. Use the brush to scrub between the tire treads, between the spokes, the underside of the frame, and anywhere you see large accumulations of snow. You want to remove as much of the bulk as possible, as the snow will begin melting immediately when you bring the bike inside. Not only will this reduce the amount of water your bike is exposed to, but it will reduce the amount of melted snow you'll have to clean off your floor.

Bring the bike inside the house and roll it onto the carpet runner. Take a rag, and immediately wipe down the chain and the fork stanchions. These two areas are most vulnerable to water damage (the chain will rust if water is left on it, and the insides of the fork can become ruined by water entry).

Keep the dustpan handy for collecting any snow that starts turning to slush. Brown colored snow can stain your floor if not removed quickly, and may also contain roadway contamination that could poison pets. Scoop it up before it becomes a problem.

Remove the battery, and clean out any accumulated snow around the power connector.

Take a canned air duster, or a compressed air nozzle, and begin cleaning around the battery terminals, cadence sensor, derailleur, freewheel cogs, cable ports and brakes. These are secondary areas that can get damaged if they suffer from long-term water exposure. Also, inspect the power connector to the motor. It's in a location vulnerable to weather exposure. We put dielectric gel on the terminals pins, and wrap the entire plug with electrical tape to keep water and dirt out.

This image shows what ended up inside after one ride: 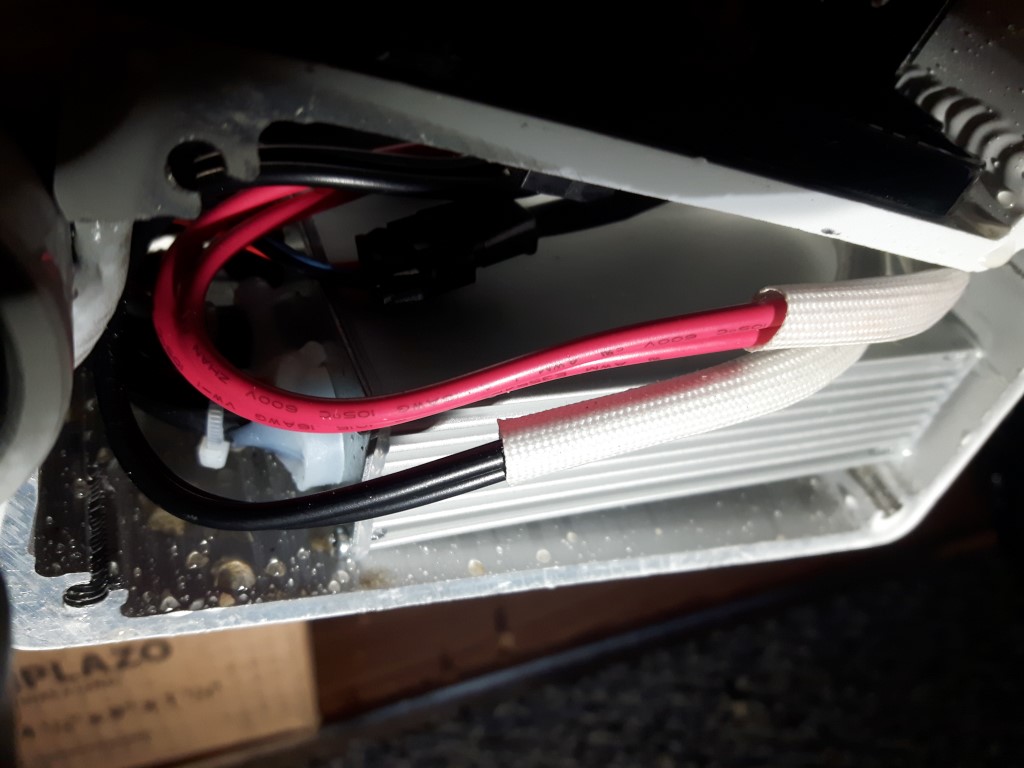 Although the electrical connectors on the bike are moderately water resistant, any effort you apply to removing water and contamination reduces the chance of having a future electrical problem. The main battery power and motor connectors transmit the highest levels of power, and are the ones that can quickly suffer from overheating and failure if they develop corrosion.

Wait some time for the battery to warm up back to room temperature and then recharge it. In warmer weather you can get a couple of rides out of the battery before having to recharge it. In winter the battery is less efficient in the cold, and also more power gets drawn from churning through snow. Don't be surprised to see a large power drop even on shorter rides. You don't want to be stranded with a dead battery out in the cold!

If you've been riding in the city and your bike has picked up sand and road salt, you're going to want to rinse off all the contamination from your ebike first. Sand can reduce the service life of your drivetrain and brakes. Road salt can be corrosive to anything metal that it comes in contact with. If you don't have access to a hose outside, you can stand the bicycle upright the bathtub and used a hand shower to hose off the bike. Remember to remove the battery first, and use a gentle stream of water. A high pressure jet of water can penetrate electrical connectors and get inside bearings. Then continue with the same cleaning procedure as mentioned above.